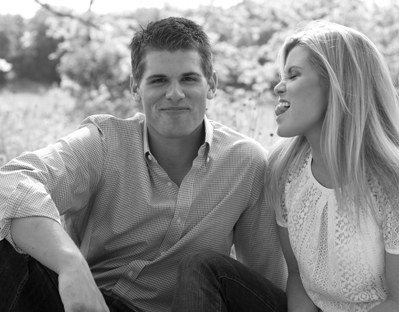 Disagreements are unavoidable, grace is indispensable.

I’ve never met anyone who married the person they wanted to fight with for the rest of their life. Contention, although rarely pleasant, is an inevitable part of even the most blissful unions. A gloomy outlook? Maybe. But when sharing the entirety of your life with someone, they are exposed to it all: the good, the bad and the ugly; chances are, they aren’t going to agree with your every opinion.

When choosing a spouse or partner, we tend to focus on similar interests, chivalry, physical attraction, core values, earning potential…  things that we think will help us avoid conflict. Perhaps we should focus more on how to disagree gracefully, with an emphasis on forgiveness.

Some people find a soulmate with an opposing personality: one confrontational party, one a bit more passive.  The calmer of the two might be a voice of reason or simply a pushover, bringing calm to disagreements. I, on the other hand, was lucky enough to find a man just as stubborn as I am. If you know us, I’m sure you’re stunned by this news (kidding). Twelve years in, we both still have to have the last word. Neither of us really ever thinks we are wrong, and if we are, it’s not something we admit easily. You know how these things escalate… with tiny jabs that start to chisel away at the soul of the person you love most in the world. But why?

It’s science – apparently – at least that’s how our pastor explained it during a sermon a few years back. He said that the term bird brain isn’t just an insult to be cast in the heat of a moment. There’s an actual, physiological change that happens in our brains when we feel threatened or angry, triggering a fight or flight response. In essence, the rational part of our brain (prefrontal cortex, which has evolved with humans over time) shuts down, leaving us only with a heightened sense of emotion and intense memories of events. As birds are generally thought to have inferior brain function to humans, we too become inferior versions of ourselves when we are angry. Our ability to reason is overtaken by our desire to win.  Any selflessness we typically feel dissolves into bitterness.  And sometimes, we just leave. (By the way, men, chase her. She’s always wanted to be chased.)

Understanding this principle has brought grace to our household.  We don’t always avoid conflict, and we’re definitely not exempt from casting hurtful looks or comments on occasion, but with the simple declaration, “bird brain!” – yes, we actually say it to each other – a level of mutual understanding can be reached.  We appreciate that the perpetrator, right or wrong, isn’t acting in a way that’s true to who they are, or to the love that they have in their heart.  We can rest assured in the knowledge that this too shall pass, and forgive each other for what is said when we quite literally aren’t ourselves.

If you can reconcile a conflict, you can survive anything (so long irreconcilable differences). Conflict resolution is arguably the most critical skill in keeping a marriage together. Challenges are inevitable. Marriage is hard. None of us are perfect. At one point or another, we will all do and say things that hurt the people we care about – it’s rotten, but it’s true. Don’t cry over split milk. Don’t throw away something great over hurt feelings. Forgive yourself. Forgive others, and let love back in.

“Faith hope and love are some good things he gave us, but the greatest is love” – Alan Jackson & The Bible 😉

1 Corinthians 13:13 And now these three remain: faith, hope and love. But the greatest of these is love.

Ephesians 4:31-32 31 Get rid of all bitterness, rage and anger, brawling and slander, along with every form of malice. 32 Be kind and compassionate to one another, forgiving each other, just as in Christ God forgave you.

View all posts by laurendfulcher